Famous in story and song, New York is the city that does not sleep.  Stevie Wonder marveled over the sights: “Wow, New York – Just like I pictured it – Skyscapers and everything!”

Many an artist sang of famous landmarks on Broadway and elsewhere, including “…the rumble of a subway train and the rattle of the taxis.”

No one sang about, or even mentioned in this city built for urban tourism, the complete absence of an adequate number of public restrooms for tourists and others possessed of the biological need to eliminate liquid waste.

For a place that prides itself on being a tourist mecca, the absence of adequate water closets is mighty inhospitable.  Whether purposeful or happenstance, this lack of modern creature comforts came to the fore during a recent day trip to meet my daughter.

We both arrived via inter-city bus, conveniently equipped with on-board potties. I availed myself of this jittery and bouncy on-board aiming challenge twice during the ride from Baltimore, to make sure I hit the Port Authority empty, in a manner of speaking.  Of course, being on a weight-loss program that encourages the drinking copiously, I had 48 oz of  water plus two cups of coffee sloshing around inside of me as I disembarked.  Because my bus arrived in Manhattan an hour earlier than my daughters, I found the Dunkin Donuts across from the Port Authority and had another cup of coffee. 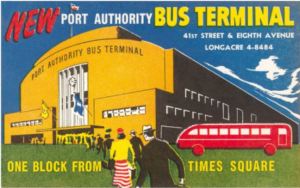 She arrived and we went to lunch.  I had a couple of glasses of diet soda, and by mid-afternoon we were in the shopping district of Greenwich Village and SoHo.  My kidneys had done what kidneys do, my bladder was doing what bladders do and I was feeling the call of mother nature.  However, none of the otherwise-ubiquitous coffee shops and chain restaurants were in view or nearby and the opportunity to relief did not manifest as the urge grew. A problem was developing and a mighty uncomfortable one at that.

As it turned out, many street corners in this gentrified, funky yet upscale Manhattan shopping mecca have small neighborhood restaurants and bars.  Ostensibly, such places of business have public restrooms.  But much to my growing discomfort, I learned that they are not for the public at large so much as for paying patrons.  After being turned away at one or two, following a direct and honest request to use the facilities, a plan formed. Here is how it worked.

He who needs to make a wee wee, saunters into a nice restaurant or upscale bar.  You know, the one that says “restrooms are for customers only” on a plaque with beautiful gold foil inlay, in the window or by the door.

“Hi. We’re from out of town and  your establishment has come so very highly recommended that we would like to make reservations for this evening if it is not too late.  Party of eight; might you be able to accommodate us at 6:30?”

I continue,”Say, I just thought of it.  One in our party has unusual food allergies.  I apologize but I should have mentioned it earlier.  Might it be possible if I could have a glance at your menu?  Restaurants such as yours usually work, but I just want to verify that there are items on the menus that this one person can accommodate, you know, from an allergen perspective. Many thanks.” I am handed the heavy menu, the one professionally printed on linen in cursive, with some wine offerings hitting three figures per bottle.

“Oh, good, I think that would work.  My family is a half-block away shopping, so before we book I’ll double-check and come right back in in a few minutes to firm up that reservation.  Meanwhile, while I’m here anyway, would it be a bother to duck into your men’s room?” Deception complete, I relieved and my bladder and kidneys were ever so appreciative for the return to normalcy.

I was four-for-four with that one, one Saturday afternoon last Fall. In four differing establishments I used the potty, without once paying the intended price of a $22 plate of pasta. Point is, it should not have come to that.

I understand why there are not public restrooms in (say) parks and such.  They can be sketchy places and prone to criminal activity.  Maybe the Paris solution would work in NYC?